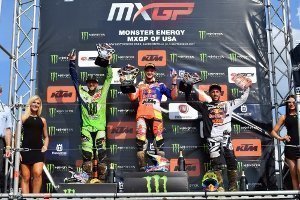 Jeffrey Herlings wins the latest round of MXGP while Antonio Cairoli continues to lead the Championship. Hunter Lawrence and Thomas Covington finish second and third in MX2 while Pauls Jonass keeps the red plate

Jacksonville (USA), 4 September 2017 – The WW Motocross Park in Jacksonville, Florida was a brand new location for the US Grand Prix and round seventeen of FIM Motocross World Championship. The North American track is characterized by sandy soil that became slippery through rainfall on Friday evening. It was a terrain on which the SCORPION™ MX32™ Mid Soft front and SCORPION™ MX Soft rear once again proved to be the best performing tyres, allowing Pirelli to achieve excellent results in both classes.

With two rounds still to run in the 2017 season, Pirelli have mathematically won the MXGP World Title thus bringing to 68 the World Titles won in this discipline since 1980. Jeffrey Herlings claimed overall victory in the USA. The Dutch rider confirmed his great skills on the sandy soil by finishing as runner-up in race one and winning the second moto. There was a great third place for Antonio Cairoli who defended his lead in the standings on a technical and challenging track. With a ninety-six point advantage over Herlings and just two rounds remaining the Sicilian could grab his ninth title next weekend at Assen. There were positive performances also for Tim Gajser in fourth, Max Anstie in fifth, and Max Nagl with sixth.

Hunter Lawrence was second in the MX2 class. The young Australian was fast in both races for third and second positions. Third place overall belonged to Saturday's Pole Position holder Thomas Covington who preceded Jeremy Seewer. The Swiss rider cut away five more points from Pauls Jonass who finished seventh in Jacksonville. The two riders are separated by only forty points in the standings and they will play for the title in the last two races.

Next Grand Prix will be hosted at the Assen circuit in Holland on September 10th.